The people of Massachusetts witnessed Sen. Elizabeth Warren’s official launch of the 2020 presidential campaign on Saturday. The primary emphasis of the campaign was on wealthy power brokers who for decades have been waging class warfare against hardworking people. The rally was held against the backdrop of Everett Mills, the place where women and immigrants in 1912 led the Labour Strike.

In the rally that lasted nearly 45 minutes in the extremely cold weather, Warren went on to discuss politicians favoring corporate giants in exchange for huge sums of money, the plight of the middle-class citizens.

Warren said, “The man in the White House is not the cause of what is broken, he is just the latest and most extreme symptom of what’s gone wrong in America” She also went on state, “A product of a rigged system that props up the rich and powerful and kicks dirt on everyone else. So once he’s gone, we can’t pretend that none of this ever happened.”

Along with Elizabeth Warren, many others including Kamala Harris and Cory Booker have already joined the race, while others like Bernie Sanders and Amy Klobuchar are expected to join the race soon. The 2020 campaign manager for the Current president of the United States, Donald Trump, if of the opinion that citizens will reject Warrens campaign which he claims to be dishonest and her socialist ideology like the Green New Deal.

In her defense, Warren expressed her refusal to accept bribes and donations from Corporates & the affluent super PACs.

Given the fact that Kennedy’s good friend, former Rep. Beto O’Rourke, is also contesting the election alongside Warren, Kennedy’s support for Warren is a clear indicator to other contesting Democrats that she remains a serious contender in the race.

One being asked about Donald Trump’s immigration policy in a CNN interview last summer, Warren went on to explain “I think we need immigration laws that focus on people who pose a real threat and I don’t think moms and babies are the places that we should be spending our resources. Separating a momma from a baby does not make this country safer.”

After Lawrence, Warren will be seen campaigning in New Hampshire followed by South Carolina, Georgia, Nevada, and California next week. Being optimistic Warren said, “There’ll be plenty of doubters and cowards and armchair critics this time around.” She continued “But we learned a long time ago, you don’t get what you don’t fight for.” 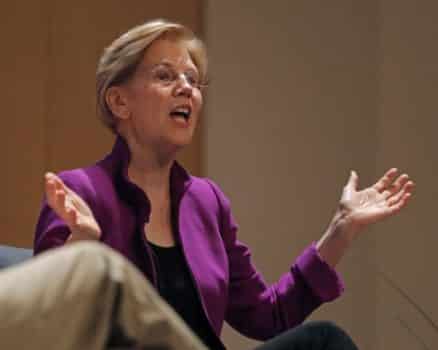