Sen. Elizabeth Warren announced her official offer for President On February 9, 2019, in Lawrence, Massachusetts. Warren declared on Saturday that she is launching her 2020 presidential campaign. She said that President Donald Trump might be in jail by the time Election Day comes around. This statement came from Warren on her first full day of campaigning after she became a declared presidential candidate.

“By the time we get to 2020, Donald Trump may not even be President,” Warren said to voters in Cedar Rapids, Iowa, gathered at the Veterans Memorial Building. “In fact, he may not even be a free person.”

While interacting with the reporters at an event in Iowa City, she explained those comments by pointing to the investigations on Trump’s link with Russia, and she said this Mueller issue would lower him from presidency and freedom.

“Well come on. How many investigations are there now? It’s no longer just the Mueller investigation,” Warren said. “They’re everywhere, and these are serious investigations, so we’ll see what happens.”

The senator said it’s important first to see Mueller’s findings when asked about whether she believes Donald Trump should be impeached.

During the campaign event, she said many sharp comments on president Trump.

She said “Every day there is a racist tweet, a hateful tweet — something dark and ugly,” Warren said in the key state. “What are we as candidates, as activists, as the press going to do about it? We’re going to chase after those every day?”

To answer to that question, Warren to avoid the trap of getting involved in every one of Trump’s actions she said:

“Here’s how I see it: Donald Trump is not the only problem we’ve got. Yeah. Donald Trump is the symptom of a badly broken system,” Warren said. “So, our job as we start rolling into the next election is not just to respond daily. It’s to talk about what we understand is broken in this country, talk about what needs to be done to change it and talk about how we’re going to do that because that is not only how we win, it’s how we make the change we need to make.”

Warren has also got stuck in some controversies for stating Native American identity on multiple occasions early in her career for which she apologized. Trump has always taken digs at the senator by calling her Pocahontas which refers to a Native American woman born around 1595 and was known for her involvement with English colonial settlement.

Warren was the first Democrat to show interest in running for the White House, forming an exploratory committee on New Year’s Eve. Elizabeth Warren was introduced by Congressman Joe Kennedy III, a fellow Massachusetts Democrat who supported her candidacy. “This country, our country, needs a leader who will restore the solidarity that Donald Trump stole,” Kennedy said on endorsing Warren. 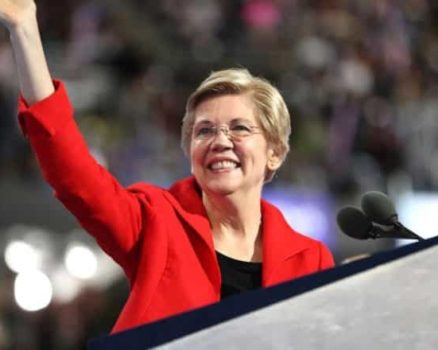